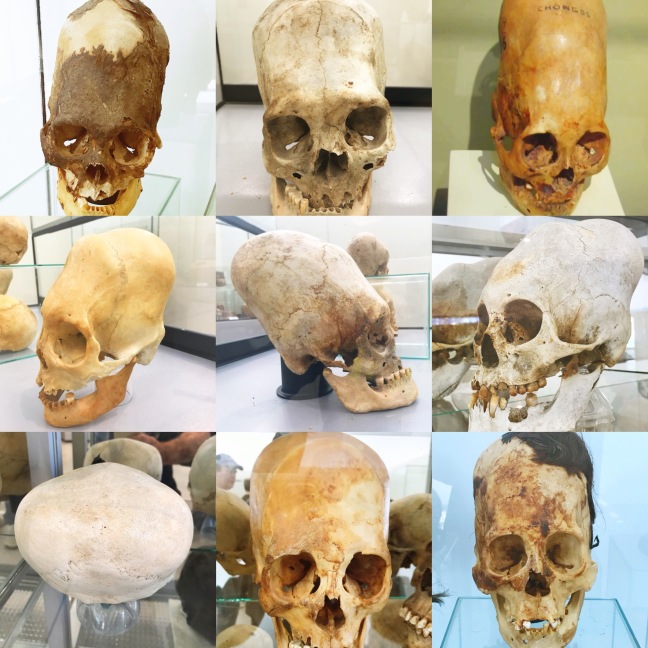 In the 1920’s, Peruvian archaeologist Julio Tello first discovered tombs in Paracas, Peru filled with skeletons who possessed some of the largest elongated skulls found on earth. Since then, many more elongated skulls from this region have been un-earthed which are believed to date from around 3,000 years ago. In 2013, researcher L.A. Marzulli, biologist Brien Foerster and a team of researchers began working on a scientific understanding and explanation to these ancient Paracas Elongated Skulls. Some of their initial DNA analysis revealed that the elongation was not just caused by artificial cranial deformation, but rather by genetics with some of the elongated skulls cranial volume being up to 25% larger and 60% percent heavier than conventional human skulls. This means that they could not have been intentionally deformed through head binding or flattening, as cranial deformation can change the shape but does not alter the volume or weight of a skull.

Yesterday in Los Angeles at the Elongated Skulls Symposium, L.A. Marzulli, Brien Foerster and their team of researchers announced some new DNA test findings. Biologist Brien Foerster, who actually lives in Paracas and who un-earthed some of these elongated skulls, gives the following information regarding the latest DNA results…

“The DNA results actually were incredibly complicated… It’s gonna take me some time to actually figure out what the results mean. What it does show for sure is that the Paracas elongated skull people were not 100% Native American. They were a mix or even you could say, in some ways, a hybrid of different people. Their blood types are very complicated as well, they should be blood type “O” if they’re 100% Native American and that’s not the case. We are likely looking at a sub-species of humanity as regards to the Paracas… Seems to be a lot of DNA evidence from extreme eastern Europe and extreme western Asia. More specifically I’m talking about the area in between the Black Sea and the Caspian Sea where ancient elongated skull people lived I think about 3000 years ago. So I think we are looking at a migration pattern starting in the Caspian Black Sea area and then entering through the Persian Gulf and then moving eastwards eventually winding up on the coast of Peru. So that’s the hypothesis Im developing now. 10 of the Paracas elongated skull’s blood were tested and they should be 100% type “O” because that is Native American, but it’s turning out high percentages of type “A,” a small percentage of type “B,” very high percentage of type “A-B” and less than half is “O.” So the Paracas were an incredibly complex ethnic mix of people… There are a number of different haplogroups that were found in the DNA tests of the Paracas elongated skulls and these haplogroups, which is your genetic ancestry, they don’t fit in with the history of Peru in any shape or form…. It appears that the largest elongated skulls on the planet have been found, “A” in Paracas, Peru and “B” in the Caucasus area in between the Black Sea and the Caspian Sea… so my theory is that there was a sub-species of human which we are going to be eventually calling Homo-Sapiens-Sapiens-Paracas, and they were living in the area in between the Caspian and Black Sea. They were invaded by somebody… and so they were forced to flee. By studying the wind and currents of the oceans I’ve been able to come up with the following concept… they moved southwards until they found the Persian Gulf and then they sailed down through the Persian Gulf and once they left that area the boats were probably taken by the prevailing currents and winds which would have taken them eastward into the Pacific ocean. Over the course of a period of time, maybe tens of years or hundreds of years, they began to breed with people in the Pacific and that’s why we’re getting such a complicated reading of blood-types… They made it to Tahiti, from Tahiti they were able to sail south to New Zealand and then once they hit New Zealand they were able to catch the Humboldt current that took them up the coast of South America. They were looking for a good harbor to land their ships or boats and when they hit the largest natural bay on the coast of Peru which is Paracas, that’s where they stopped and that’s where they decided to establish themselves because almost nobody was living there at the time… over the course of time they had to breed with local native people otherwise their bloodline would become to concentrated… eventually they found Paracas probably about 900 B.C. and they lived in relative peacefulness… in 100 A.D. the invasion of the Nazca people happened from the north and when the Nazca entered the area, they slaughtered the elongated people who were the only royal class of people. We had 3 medical experts with us – Dr Malcom Warren (Chiropractor), Rick Woodward (Anthropologist) and Dr Michael Alday (Medical Doctor) and all 3 of them stated quiet emphatically that because of the abnormalities found with some of the Elongated Skulls from the Chongos cemetery in Peru they have no other choice but to state that some of these ancient Paracas were a sub-species of humanity… it had to be genetic, they had to be born with these abnormalities. They had dark red hair… the royal Paracas were the ones with elongated heads, not the common people… the royal family of the Paracas, they lived in subterranean underground houses and I think the reason for that is that they had light-colored skin, probably sensitive eyes because of the extreme sunshine…”