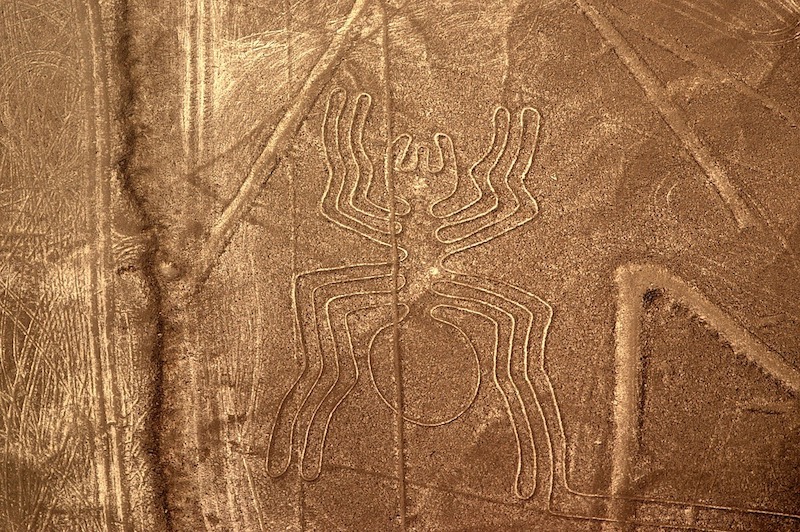 THE NAZCA LINES ARE SOME OF THE MOST MYSTERIOUS GEOGLYPHS KNOWN TO MAN. HERE ARE 16 ENIGMAS CONCERNING THEM…

#1 They are located in one of the most desolate and dry locations on earth – the Nazca desert of southern Peru which receives less than one inch of rain per year. 1

#4 One of the strangest of all the zoomorphic images, appears to be a humanoid with a large head and eyes.

#5 The longest of the straight lines extends up to 30 miles long and the largest figurine measure up to 1200 feet in length – as large as the Empire State Building. 1

#6 Scientists from the University of Dresden measured the magnetic field and found that it changes 8 feet below the surface of many of the lines and also discovered that the ability to conduct electrical currency was 8000 times higher on the lines. 4

#7 Almost impossible to identify from the ground, it appears they were created to be seen from thousands of feet up in the air.

#8 They were first brought to public awareness by pilots who began flying commercial planes over Peru in the 1930s. 1

#9 Most of the designs are shallow lines made in the ground by removing the reddish pebbles and uncovering the whitish ground beneath. 2

#10 Because of its isolation and the dry, windless, stable climate of the plateau, the lines have mostly been naturally preserved. 2

#11 German mathematician and archaeologist Maria Reiche stated that Nazca artists prepared preliminary drawings on small six-foot square plots which are still visible near many of the larger figures. 3

#12 The 6 mile long triangle geoglyph is almost laser accurate in shape with the ground appearing to be stamped down about 24 inches throughout the entire shape. 4

#13 Researcher and author Anthony F. Aveni has documented how two-thirds of the lines seem to follow channels of a highly advanced irrigation system which the Nazca had produced. 3

#14 Senior astronomer at the Adler Planetarium Phyllis Pitlugaand performed computer-aided studies of star alignments and asserted the giant spider figure is an anamorphic diagram of the constellation Orion. 2

#15 Author, Biologist and Researcher Brien Foerster believes that “The lines were created by two cultures – one, the Nazca people, but prior to the Nazca, the Paracas people who had elongated skulls.”

#16 According to legend, the mysterious white-skinned Inca god “Viracocha” commissioned the Nazca Lines & geoglpyhs in the ancient past. 4

3 Foerster, Brien, Nazca: Decoding the Riddle of the Lines, 2014

View all posts by D Olson