All over the world are megalithic marvels that whisper to us from a prehistoric age. From the Great Pyramid of Giza, to the astronomical monument of Stonehenge, to the giant cyclopian walls of Saksaywaman and more. These antediluvian wonders, constructed with an ancient form of technology, confound today’s experts and defy our greatest modern engineering. The walls at Saksaywaman consist of interlocking blocks that were crafted with mortarless precision, some of them weighing as much as 125 tons and are so precise that you cannot fit a human hair between them.

#2 The Ancient Texts and Oral Traditions

Ancient manuscripts such as the Bible, the book of Enoch, the dead sea scrolls and the writings of Josephus, as well as the oral traditions of many Native American tribes speak of a race of giants that once walked the earth and wreaked havoc upon humanity…

“There were giants [Nĕphiyl = Giants, Nephilim] on the earth in those days, and also afterward, when the sons of God came in to the daughters of men and they bore children to them. Those were the mighty men who were of old, men of renown.” Genesis 6:4 NKJV

“There were till then left the race of giants, who had bodies so large, and countenances so entirely different from other men, that they were surprising to the site, and terrible to the hearing. The bones of these men are still shown to this very day, unlike to any credible relations of other men.” – Josephus

From the elongated skulls discovered in South America, to the giant skeleton’s of the mound builders un-earthed in North America during the gold rush era, the evidence cannot be covered up any more. DNA analysis of the elongated skulls found in Paracas, Peru have recently been done and verify that the elongation was not just caused by artificial cranial deformation, but rather by genetics. The elongated skulls cranial volume is up to 25 percent larger and 60 percent heavier than conventional human skulls, meaning they could not have been intentionally deformed 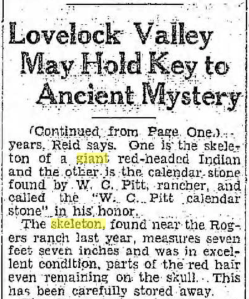 through head binding/flattening. They also contain only one parietal plate, rather than two. 1 Newspaper articles from the 1800’s and early 1900’s document the discovery of giant skeletons unearthed in burial mounds, caves and river-beds all across the land. Several skeletons with red-hair ranging from 7 to upwards of 10 feet in length were uncovered in Lovelock cave and there are a handful of people who have testified to seeing giant skulls from the cave in a storage room at the Humboldt Museum in Winnemuca, Nevada.