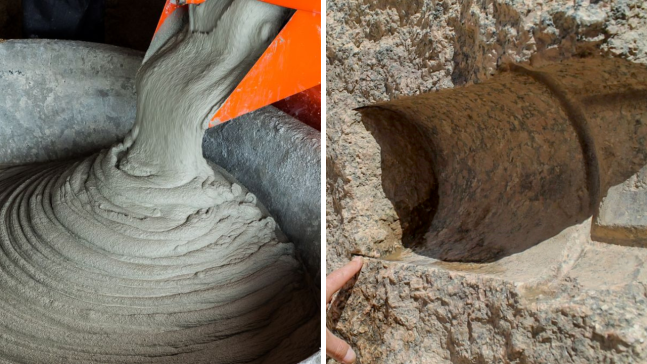 There are ancient building projects we call “Megalithic Marvels” all over the world. One thing many have in common are the use of stones of monstrous size cut out of quarries quite a distance from the construction site and somehow transported, lifted, and placed so perfectly that even today they fit together almost seamlessly. Another thing in common is stone work, both decorative and functional, done with a precision and on a scale that escapes us today.

We often hear that the stones were created onsite using a “Geopolymer” method. This is where the blocks were created as a kind of concrete. They ground down the limestone and turned it into a slurry with water then poured that slurry into molds which would form the blocks.

One of the chief proponents of this is Joseph Davidovits from the Geopolymer Institute in France. Davidovits has stated publicly (1) that South America’s Megalithic Marvels in Tiwanaku and Pumapunku are made with “Artificial Geopolymers”. It is important to note here that geopolymer usage is most associated with Sandstone and Limestone. Davidovits proposes that in South America, plant extracts were used for softening limestone or stone containing limestone. Davidovits claims that other stone softening extracts would have been used for the volcanic andesite structures in South America. Andesite has a mineral composition that is intermediate between granite and basalt. For molding volcanic andesite stones, Davidovits believes the builders used an acid-based geopolymer technology involving carboxylic acids manufactured from local biomass (maize), which reacted with a hardener based on guano. Based on his findings, Davidovits projects the following ages for South American megaliths:

Davidovits also suggests (2) that some or all of the limestone blocks used in the construction of the Giza Pyramids in Egypt were created using a geopolymer method. Davidovits and his team made blocks with the same chemical makeup and appearance of the Giza pyramid (outer casing) stones with perfect joints between the blocks. In the France climate in which the experiment was done, it took 3 months to cure a block.

I’ve spent some time researching Joseph Davidovits’ theory using several of his video presentations as well as comments on his theory made by Graham Hancock. Here is my summarized compilation of that work:

(3) It is noteworthy that within many of the blocks used to build the pyramid one can see entire fossils of shells and sea life. It is difficult to understand how these fossils could have survived the grinding up process used to create the slurry used in the creation of geopolymer stones.

In any block where you find a fossil embedded in the rock, you are definitely not looking at concrete. You are looking at an original block. It is easy to see fossils today in broken limestone blocks at the site of the Great Pyramid.

The geopolymer argument may be an answer to the scale of the great pyramid. 2 ½ million stones would have been easier to pour than to carry.

It is true that the majority of the great pyramid is made of limestone blocks of about 2 tons each. Even if the point is proved that the early Egyptians mastered a form of concrete (geopolymer) long before it was thought to be mastered by the Romans, there are still huge issues of how the Egyptians moved enormous stones. For example, in the heart of the pyramid you find in the King’s Chamber blocks of black granite blocks weighing 70 tons each. There are hundreds of these blocks. These blocks are definitely not the result of some sort of concrete (geopolymer) technology. We know exactly where these blocks came from. They came from quarries in Aswan, Egypt about 500 miles south of Giza.

So whether or not the ancient Egyptians were able to create limestone blocks using some sort of geopolymer technology, we still have to deal with the fact that they had to lift gigantic blocks of pure granite weighing 70 tons to heights of hundreds of feet above the ground and position them perfectly in place.

On Moving the Huge Granite Stones: Egyptologists want us to picture tens of thousands of people hauling blocks at the end of ropes. Human labor cannot haul a block weighing hundreds of tons, or even tens of tons, up a slope of over 10-degrees. If you want a 10-degree slope to reach 300 feet up to where the King’s Chamber is, then that ramp would need to extend back nearly a mile and would require more material in its construction than was involved in the creation of the Great Pyramid itself.

In 1978 a Japanese Team Attempted to Reconstruct a Pyramid In Giza:

In 1978, the Japanese attempted to discover the secrets behind the construction of the Great Pyramid of Giza. A group of construction engineers and research scientists from Japan (Nippon Corporation) undertook a reconstruction of the Great Pyramid on a much smaller scale. The limestone blocks were taken from a nearby quarry. The team attempted to use basic tools (basic tools, ramps, local labor force) to create the sophisticated fittings of the limestone blocks. In the end, it proved too difficult to continue with primitive methods and they resorted to modern means to create their small model, about 60 feet in height. In the beginning they used stone chisels and hammers to cut the rock at the quarry, but soon resorted to air powered jack hammers to remove the stone from the quarry. Moving the rock from the quarry was planned to be done by 100 locally hired laborers, but in the end was accomplished by truck and by steamboat. Ramps were at first used to haul up the 2- and 3-ton blocks, but finally planes and a helicopter was used to move the blocks. The great pyramid has between 600,000 and 2 million blocks of the sizes used in the Japanese experiment. The great pyramid has about 200 steps. In their model, the team reduced the size to 90 steps. The Japanese team did not attempt to account for interior chambers, rooms, or above and below ground passages. Only to create a model based on the external appearance of the Great Pyramid using only limestone stones. Stones inside the Great Pyramid are made of granite with weights of between 50 and 60 tons. Using granite stones of this size was not a part of their plan. (4)

It is naïve to say that simply because there is a method of doing one thing, it automatically applies to all similar things. For example, there are many videos on YouTube that show how a massive stone can be moved using only manpower. Also, it is certain that one can create certain types of stones using a geopolymer method. So, should we say that all stones of a certain type must have been created using geopolymers? Or should we say that massive stones all over the world must have been moved using a specific technique? Of course, the answer to both questions is ”NO”.

Also, there is the logistics of a Megalithic building project. Moving one big stone is quite a feat. Moving hundreds, or thousands, of stones that weigh hundreds of tons each and then lifting them high into the air to be placed with absolute mathematical precision, well that is another thing entirely. And what about doing it within a specific, relatively short (like a person’s lifetime) amount of time? These are serious questions to ponder when looking at Megalithic Marvels world-wide. The Japanese team I referenced above demonstrated these difficulties and more. And what about the stone cutting. All over the world there are cuts made in solid rock with a precision we can’t match today. We have no idea how the cutting was done. We are told that this was all done using copper tools, sand, and water. Consider the following as we move forward: On the Mohs’ Scale of Hardness;

Cutting solid granite with copper is a bit of a leap for me. Even if it were possible, what about the scale? Graham Hancock’s statements above introduce these types of questions to the conversation.

So, today with all our superior technology, we can’t cut, transport, and precisely place monstrous granite blocks of the size they used, some over 100 tons, and especially not in the quantities they used. And we can’t lean on the geopolymer option which has us creating the stones on-site, because we don’t know how to do that with granite and have no evidence the ancients did either.

Because none of us were there and because we have no extensive historical records (other than oral histories and wall paintings) of how the ancients accomplished these feats of architecture, and because we can largely admit that we don’t know how we would accomplish them today, let’s move away from the “How” and talk about some real possibilities of “Who?”

About the Author: Lynn Myers (ThB, ThM) is the author of UFO’s Cryptids and the Bible. He holds a Master’s Degree in Theology and currently teaches intermittently at a local Seminary. He is a retired “Data Architect” for a fortune 50 company and serves as as admin for the Megalithic Marvels Facebook Group

2 Joseph Davidovits, How the pyramids where built in Egypt, available from https://www.youtube.com/watch?v=znQk_yBHre4, accessed 5 September 2022.

4 Earthmilk Ancient Energy and Academy for Future Science, How was the Great Pyramid Built Unknown by Japanese Research.MP4, (Copyright, 1978), taken from: Academy For Future Science, available from https://www.youtube.com/watch?v=OHOgtQa7LVw, accessed 5 September 2022.