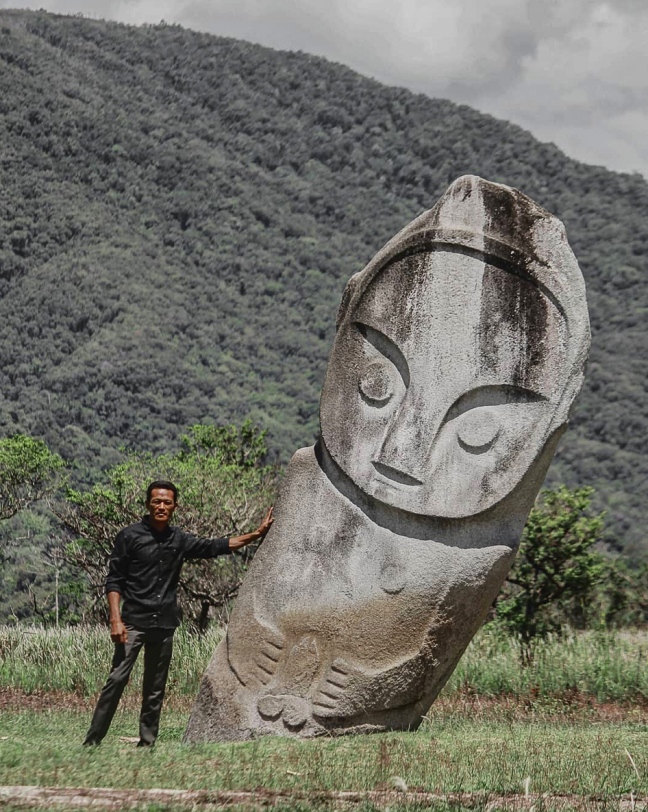 Hidden away in the Bada Valley, south of the Lore Lindu National Park in Sulawesi Indonesia, are hundreds of ancient megaliths and prehistoric statues estimated to be at least 5000 years old. It is not known for certain when these megaliths were made nor who made them. They were discovered by western archaeologists in 1908. 1

The enormous cylinders known as “Kalambas” range in height from 5 feet to 10 feet and were crafted from individual blocks of solid stone. The statues range in height from 2 feet to more than 15 feet and depict anthropomorphic and zoomorphic figures. None of the statues have legs, but most feature large  heads and some display genitalia. 2

Palindo, which translates as “The Entertainer” in Indonesian, is the largest standing stone statue that measures over 15 feet high. Most of the statues have fallen over and remain half-buried in streams or in the middle of the fields. Oral tradition among the village elders of Sepe states that these figurines are a representation of the population the preceded them.

As with the statues, the true purpose and origin of the Kalambas remain a profound mystery that archaeologists have not been able to solve. 3 Archeologists believe the Kalambas were once covered as they have found massive stone lids in the vicinity, which means that they were not used as bathtubs as some researchers have propagated.

These megaliths are unique to the area, and therefore could have been made by an entirely different culture. Apparently the stone used to craft these megaliths is a type not found anywhere near the area, thus raising the possibility that they were transported from somewhere else beyond. 4

What were these massive stone cylinders used for? Where, when and how were they quarried? How were they transported from their unknown quarry sites to the thickly forested mountains and valleys of Central Sulawesi.? Who (or what) did all this, and why? 5