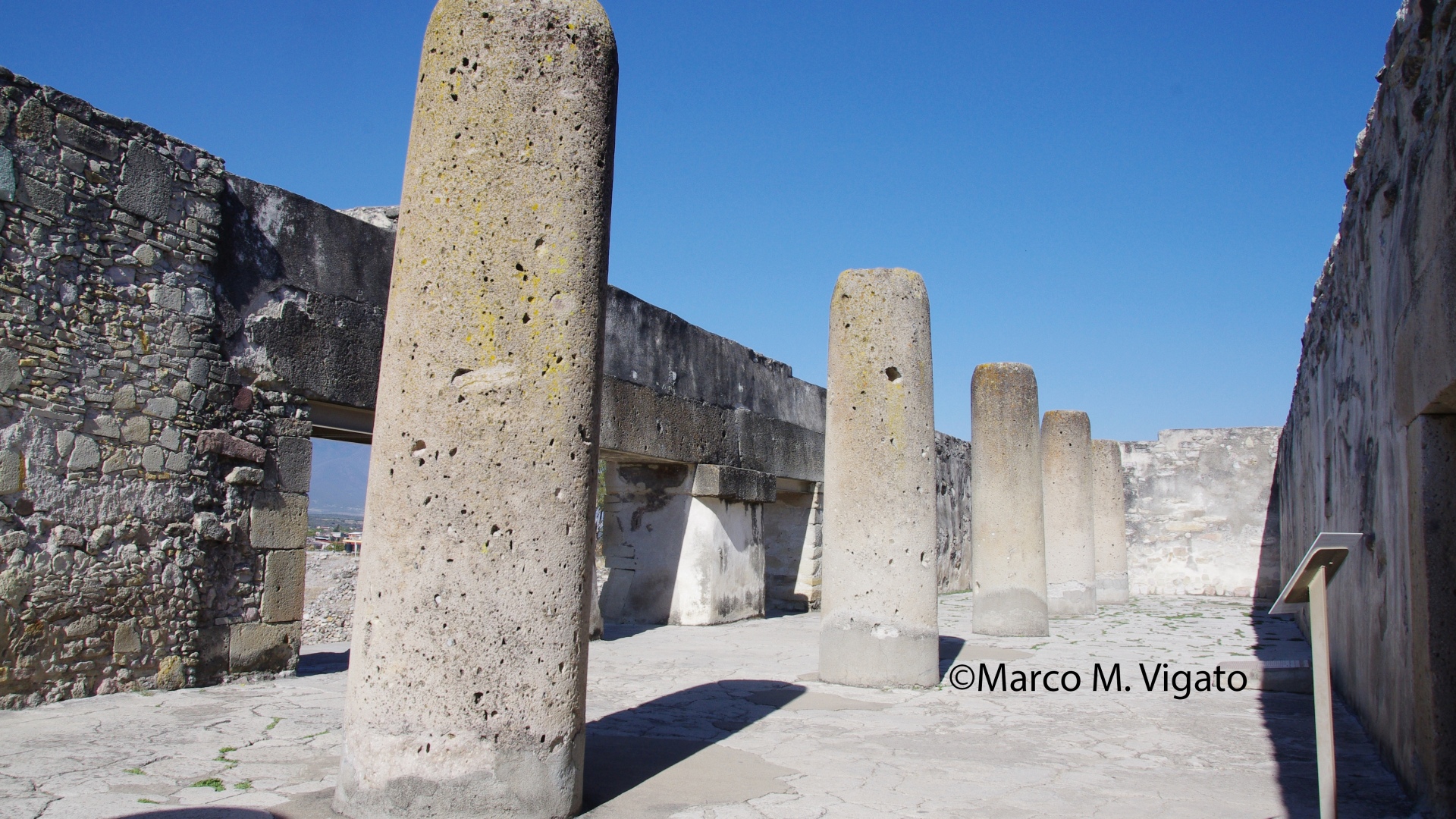 By Marco M. Vigato. Marco holds an MBA from Harvard Business School and a BA and MSc in Finance from Bocconi University. He is a photographer and researcher documenting the evidence of ancient civilizations and sacred sites around the world, specifically the megalithic remains of ancient Mexico and Mesoamerica. A native of Italy, he currently lives in Mexico City. Please follow his personal blog Uncharted Ruins as well as his Facebook Page for insightful articles and photographs relating to ancient history and megalithic structures

1. The Terraced Hill of Tezcotzingo

In Aztec times, Texcoco was already an ancient city, the “Athens of America”. Virtually nothing remains of the ancient city itself, which at one time rivaled the great Aztec capital of Tenochtitlan in beauty and magnificence. In 1824, the English antiquarian William Bullock could still admire the great Pyramid of Texcoco and the palace of the Acolhua kings, a structure “far surpassing any ideas I had formed of the architectural abilities of the aboriginal Americans.” The palace measured over 300 feet on each side and was built on sloping terraces raised one upon the other. It was composed “of huge blocks of basaltic stone, about four or five feet long, and two and a half or three feet thick, cut and polished with the utmost exactness.” Although nothing now remains of this megalithic wonder, the nearby hill of Tezcotzingo provides abundant evidence of the skill of its unknown megalithic builders. The entire hill was artificially terraced to become a symbolic representation of the cosmic mountain. On each level, temples, altars and aqueducts were carved with some unknown method in the hard porphyry stone of the hill, all connected by means of rock-cut stairways and tunnels. The most impressive structure is a monolithic basin known as the “Bath of the King”. It is perfectly circular, with a smooth and apparently machined surface. Whatever tool was used for carving the basin, it left clearly spaced circular grooves on the rock surface. The same level of workmanship and polish can be found in the many rock-cut stairways that connect the different levels of the complex. The entire hill appears moreover pierced by a number of artificial tunnels and excavations, which are presently all blocked.

2. The Colossus of Coatlinchán

The monolith of Coatlinchán is a colossal ancient statue that for centuries lay abandoned in an andesite quarry near the ancient city of Texcoco, before it was finally moved to Mexico City in 1964. The same andesite quarry is also believed to have provided much of the construction materials for the stone sculptures and megalithic architecture of Teotihuacan, some 25 miles to the North-East of Mexico City. It is believed that the monolith of Coatlinchán is a representation of the Rain-god “Tlaloc.” It is nearly 7 meters high and weighs an estimated 152 tons, making it the largest ancient statue and one of the largest carved monoliths in all the American continent. The monolith now decorates a fountain in front of the National Museum of Anthropology in downtown Mexico City.

3. The Monolithic Pyramid of Malinalco

The little town of Malinalco, located less than 100 kilometers from Mexico City, contains a unique complex of rock-cut temples and structures of which the most famous is the Cuauhtinchan, the so-called “Temple of the Eagle Warriors.” Thousands of tons of rock were removed from a steep cliff face overlooking the town of Malinalco to carve a three-tiered pyramid, monolithic stairways and a set of immense rock-cut chambers of unknown function. Just as at Tezcotzingo, the precision of the cut is remarkable, with perfectly flat and polished stone surfaces that suggest the use of a mechanical process of removing stone. The most impressive of the rock-cut chambers is circular in shape, and contains an altar and benches all cut out of the living rock with astonishing precision. The entire complex of rock-cut chambers and structures is usually dated to 1470 AD, but the workmanship and style of construction, so different from the usual Aztec construction techniques employing mortar and small stones, suggests a much earlier dating of the megalithic structures.

4. The Forgotten Megaliths of Teotihuacan

Between the 2nd Century and the 5th Century AD, the great pyramid city of Teotihuacan was the largest in the Western hemisphere, the “Rome of America,” with a population of nearly 250,000. Yet its monumental avenues and massive pyramids dedicated to the Sun, the Moon and the Feathered Serpent conceal the vestiges of a much older and even more mysterious past. The foundations of great megalithic buildings are visible under some of the structures of the ancient city, the older structures employing large, finely dressed megalithic blocks, in contrast to the later structures being largely built of mud-bricks and small cemented stones. There is evidence that an immense megalithic structure may have once stood in the area now occupied by the Pyramid of the Feathered Serpents. Hundreds of andesite stone blocks, many weighing in excess of 10 tons, lie scattered over a very large area and were apparently reused as part of the filling of the pyramid. These blocks exhibit sharp edges, perfectly planar surfaces and complex concave surfaces that would have been nearly impossible to obtain with the primitive flint and obsidian tools supposedly available to the ancient builders of Teotihuacan. Some of stones recovered from the filling of the pyramid even show evidence of drilling and saw marks as to suggest some mechanical method for cutting stone. An immense effort must have gone into the quarrying, cutting and fitting of these enormous stone blocks, as no local source of andesite stone exists in a range of 25 miles from Teotihuacan across very rugged mountainous terrain. Yet there seems to be no trace of the structures to which the stones originally belonged.

5. The Cruciform Tombs of Mitla and Guards 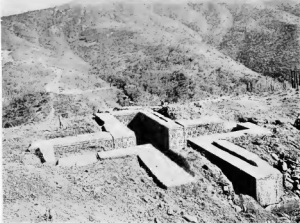 Some of the largest stone blocks employed in any ancient structure across the Americas are found at Mitla and in the nearby sites of Xaagá and Guiaroo. At Mitla, enormous andesite and porphyry stone lintels and monolithic columns, some weighing as much as 30 tons, were regularly employed in the construction of palaces and pyramids above ground. Yet it is in the maze of underground tombs, chambers and tunnels that run under the ancient city that may be found the finest examples of megalithic stonework in all of Mexico. The stones that form the walls and ceilings of these underground chambers are cut with astonishing precision, as to leave nearly imperceptible joints between the blocks. A mysterious cruciform structure was discovered and photographed in 1902 at a site called Guiaroo, in the vicinity of Mitla. It was built of immense megalithic stone blocks measuring as many as 6 meters long and weighing in excess of 50 tons. Unfortunately the location of this remarkable structure is presently unknown, but other enormous stone blocks can be seen at a nearby quarry, the largest measuring 6.24 x 3.89 x 0.80 meters and weighing an estimated 55 tons.

View all posts by Dee Olson

One Reply to “The Top 5 Megalithic Mysteries of Mexico”