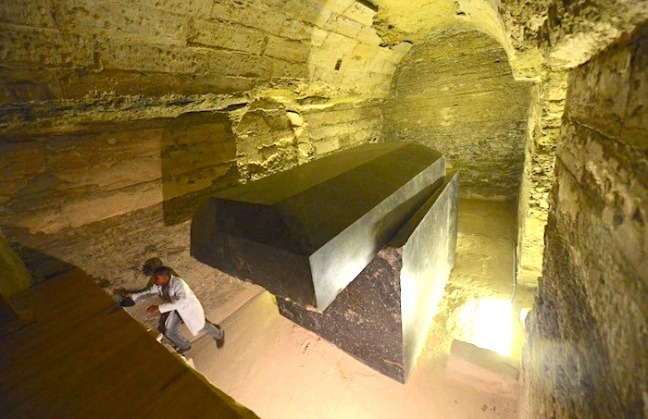 Conventional archaeology propagates the notion that the further we look back into history, the more archaic the civilizations we see and the more inferior the methods of construction. Yet all over the world are ancient anomalies and megalithic marvels constructed with an ancient lost technology that confound today’s experts, defy our modern engineering and tell us a different version of history. Case in point – the 25 black boxes of the Serapeum.

Located in the area known as Saqqara, the Serapeum is one of the most enigmatic ancient sites in all of Egypt. Lost under the sands of time, this labyrinth was discovered in 1850 and hides 25 granite black boxes crafted with laser like precision. Each box weighs approximately 70 tons combined with a lid of 30 tons that is cut from the same piece of stone. Each box was found empty and thus their purpose remains a mystery. It is estimated that these 100 ton stone boxes would need at least 2000 men to transport them. However, with the tunnels being only two feet wider than the boxes themselves, there would not have been nearly enough space inside for such a vast army of men to lower and transport these megaliths to their resting places. The Egyptians would have had to use torches to see inside the pitch black tunnels, yet there is no evidence of smoke markings from flame light on the low tunnel ceilings. The stone was quarried in Aswan about 1000 kilometers away. The official statement from Egyptologists is that these boxes were made during the late dynastic period as burial places for sacred bulls, yet how would the dynastic Egyptians have been able to craft these granite boxes to such incredible precision with their hammers & chisels? The crude hieroglyphic carvings that are found on the outside of three of these boxes appear to be made thousands of years later by the Egyptians who found them resting in place. Notice how superior the boxes appears compared with the enclosures that surround them.