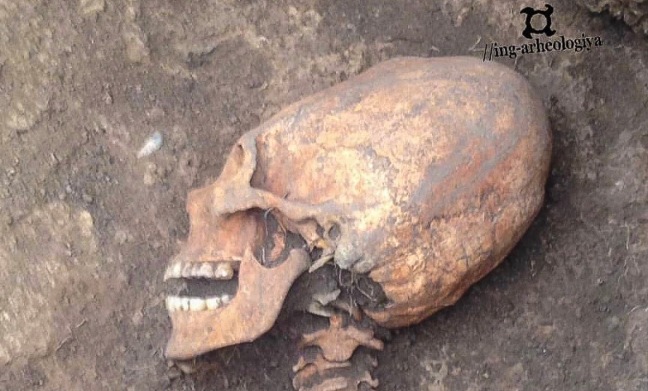 An enigmatic skeleton with an elongated skull and immaculate teeth has recently been unearthed in Russia. Below is the official statement from the archaeological team…

“In November 2018, the employees of the Institute of Archeology of the Caucasus LLC and the GKU EKI Krupnova Archeological Center began the excavations of the Gamurzievsky settlement, occupying the top and slopes of the elevation between the Nazranka and Sunzha rivers. During the excavations a large number of economic holes were identified: they are round in plan and cylindrical in section. In addition to their typical finds, several pits have found human remains, which, along with numerous bones of wild and domestic animals, ceramics, bronze arrowheads and women’s ornaments, belong, according to preliminary data, to the Bronze Age. Of great interest is the unique find – the female skeleton with artificial deformation of the skull and neck, which dates from the 4th – 6th centuries…” 1

The archaeological team seems to conclude that the elongation is the result of artificial deformation, but what if the elongation in this case is actually due to genetics? At first glance, this skull appears to have more cranial mass than average human skulls.

Just a few years ago an infant skeleton estimated to be 2000 years old and possessing a very large elongated skull was discovered near this same area. As you can see pictured below, the infant skull also appears to have more cranial mass than normal.

These elongated skulls found near the Black Sea closely resemble the Paracas skulls found in Peru, some of which are up to 25% larger and 60% percent heavier than conventional human skulls, meaning they could not have been intentionally deformed through head binding, as cranial deformation can change the shape but does not alter the volume or weight of a skull. 2

Almost perfect, immaculate and well preserved teeth have also been associated with many of the ancient Giant skeletons that have been discovered in North America. 3

Below is a short video recorded by the Russian archaeological team of this female skeleton with elongated skull and well preserved white teeth.