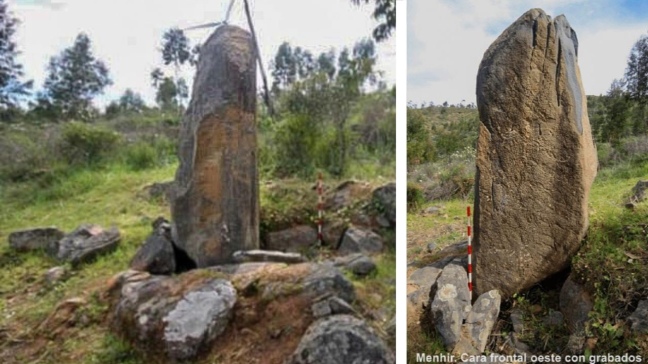 A huge megalithic complex of more than 500 standing stones has been discovered in southern Spain, and the archaeologists there are saying that this prehistoric site could be one of largest of its kind in Europe.

The stones were unearthed on a plot of land in Huelva, a province flanking the southernmost part of Spain’s border with Portugal. Spanning about 1,500 acres, the land had been earmarked for an avocado plantation. However, before granting the permit, the regional authorities requested a survey in light of the site’s possible archaeological significance, and the survey went on to reveal the reality of the this ancient site. How disappointed do you think the avocado farmers were when they first heard the big news?

“This is the biggest and most diverse collection of standing stones grouped together in the Iberian peninsula,” said José Antonio, a researcher at Huelva University and one of the project’s three directors. He went on to say that It was probable that the oldest standing stones at the site were erected during the second half of the sixth or fifth millennium BC.

At the site they found a large number of various types of megaliths, including standing stones, dolmens, mounds, coffin-like stone boxes called cists, and enclosures. Standing stones were the most common finding, with 526 of them still standing or lying on the ground. The height of the stones was between one and three metres. One of the most striking things was that they unearthed such diverse megalithic elements that were grouped together in one location. Primitiva Bueno, the co-director of the project said “Finding alignments and dolmens on one site is not very common. Here you find everything all together – alignments, cromlechs and dolmens – and that is very striking.”

Most of the menhirs were grouped into 26 alignments and two cromlechs, both located on hilltops with a clear view to the east for viewing the sunrise during the summer and winter solstices and the spring and autumn equinoxes. Many of the stones are buried deep in the earth. They will need to be carefully excavated. The work is scheduled to run until 2026, but “between this year’s campaign and the start of next year’s, there will be a part of the site that can be visited” the directors said.

This is simply an amazing modern day discovery.