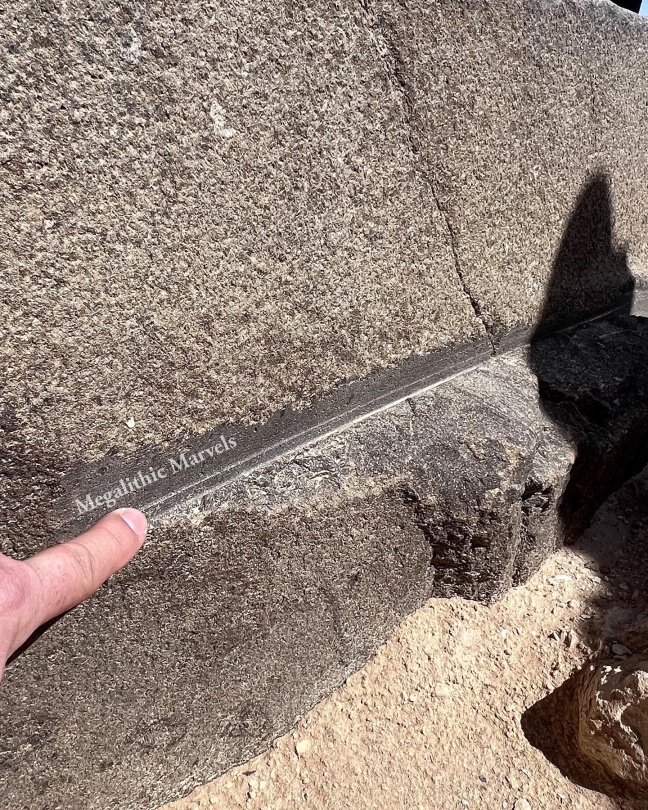 Today was day 1 of the first ever Megalithic Marvels of Egypt tour hosted by me & Mohamed Ibrahim – renowned Egyptologist and Tour Guide.

Photos 1 & 2 – show one of the many ancient tool cut marks located around the Great Pyramid of Giza. As you look close, you can see that something like a saw precision cut this very hard granite stone. What tool could have done this? Is this evidence of lost ancient technology?

Photo 3 – Did you know the Great Sphinx of Giza has a tail? It also has a smallish head compared with the rest of its body (This can clearly be seen from arial photos). Did the dynastic Egyptians re-carve this head to look like it does now? What might have the head looked like in ages past? Mohamed Ibrahim believes it was a lioness head.

Photos 4 & 5 – Me gazing at the stone box found deep inside the Second Pyramid. Was it a sarcophagus for Egyptian Pharaoh Khafre as mainstream Egyptology suggests or was it actually created for another purpose? No Mummy was ever found inside… Could it have housed an ancient energy source that powered this pyramid? As I crouched and crawled through the tight passages to get inside this pyramid I was telling myself – “In no way whatsoever does this feel like it was made to be a burial tomb!!!” I’ll be answering the why question to this in future posts. – Dee

Photo 6 – Me standing inside the megalithic “Valley Temple” located right next to the Sphinx. This structure is the epitome of a megalithic marvel. Mohamed believes that it was created as an ancient source of healing. Aside from the mega-ton blocks, this site features the tightest joints I’ve ever seen between megalithic blocks – it was so precise in some places that you could barely tell they were two different blocks. Look for many photos about this coming soon.

Photo 8-9 – we entered a little known subterranean chamber behind the Great Pyramid that features a massive megalithic foundation & Hieroglyphs that appear to have been added later.

Photo 10 – our group enjoying an insightful lecture from our guide Mohamed Ibrahim.