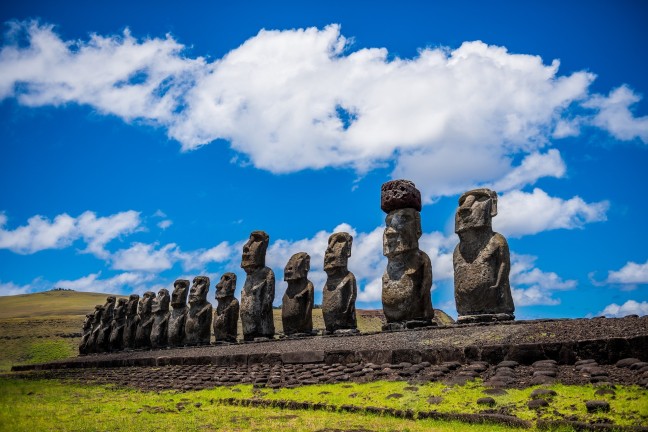 The world-famous Easter Island statues known as the Moai are so iconic and ingrained into the fabric of modern pop culture that most people do not even realize that the statues themselves point to so much more mystery and intrigue regarding this ancient island civilization. Therefore, before we investigate the statues, let us first start with the island itself…

Lying isolated in the East Pacific, Rapa Nui is the easternmost Polynesian island and the most remote inhabited island on the planet. Situated on the Nazca Plate at a volcanic and tectonic “hot spot,” it is 3703 km west of South America. The climate is subtropical to temperate. Winds are nearly constant. The surface of Easter Island is 63.2 square miles. The Rapa Nui landscape is one of gently rolling hills and slopes irregularly punctuated by volcanic cones. Maximum elevation is 510 m above sea level. 1

There is evidence to suggest that the island was once covered by ancient forests according to Professor Dr. Olof H. Selling, who was the Director of the paleobotanical department of the Swedish Museum of natural history. He examined the stratified deposits from the crater swamps under microscope and was able to determine that the island had once been covered by forest flora and trees that later became extinct. 2 In one of the rongo-rongo tablets known as “Apai,” there is a reference to the original settlement period that has been passed down as part of the oral tradition that states something similar…

“When the island was first created and became known to our forefathers, trees were growing so close together along the borders of the road that they met overhead, and the branches were laced together like muscles.”

Q What happened to this ancient island oasis?

One factor that might have contributed to the extinction of multiple plant species was the introduction of the Polynesian rat.

A UNESCO world heritage site, the world heritage center states the following about Easter Island… “Rapa Nui National Park contains one of the most remarkable cultural phenomena in the world. An artistic and architectural tradition of great power and imagination was developed by a society that was completely isolated from external cultural influences of any kind for over a millennium.”

The First European ever recorded to have visited Easter Island was Dutch explorer Jacob Roggeveen in 1722. Originally on his way to find the fabled land of Terra Australis, he instead found this small island which he named Easter Island because his ship landed there on Easter Sunday April 5th. Roggeveen who reported seeing about 3000 natives covered in tattoos, body paint and feathers, stated the following…

“Their ears were so long that they hung down as far as to the shoulders. What the form of worship of these people comprises we were not able to gather any full knowledge of, owing to the shortness of our stay among them; we noticed only that they kindle fire in front of certain remarkably tall stone figures they set up; and, thereafter squatting on their heels with heads bowed down, they bring the palms of their hands together and alternately raise and lower them. At first, these stone figures caused us to be filled with wonder, for we could not understand how it was possible that people who are destitute of heavy or thick timber, and also of stout cordage, out of which to construct gear, had been able to erect them; nevertheless some of these statues were a good 30 feet in height and broad in proportion.”

Notice the very peculiar ceremonial gestures the natives performed in front of the Moai statues. The early explorers who came to Easter Island in the 18th and 19th centuries were astonished to find that the islanders did not fish for a living, but in fact were skilled farmers. 3 While main-stream archeaology maintains that a society of Polynesians settled the island between 300-1000 AD, Missionary Eugene Eyraud who lived on the island in 1864 stated what many others had come to notice… “These savages are tall, strong and well-built. Their features resemble far more European type than those of the other islanders of Oceana.” 4 Eyraud was also the first to discover that the Easter Islanders once had an inscribed script on tablets called “rongo-rongo” that was indigenous to themselves. Glyphs include pictographic and geometric shapes; the texts were incised in wood in reverse boustrophedon direction. Despite numerous attempts, the surviving texts have not been deciphered which contained a record of the lost language of Easter Island. 5

Many early explorers to the island had reported about the unusually shaped skulls and large bumps found on the back of the necks of the Island’s inhabitants. Wood was scarce on Easter Island during the 18th and 19th centuries, but a number of highly detailed and distinctive carvings have found their way to the world’s museums which depict these strange features. These odd and highly detailed figures carved from Toromiro pine, are said to represent their ancient ancestors. 6

Q Why did these ancient ancestors posses such strange genetic features?

Dutch explorers Jacob Roggeveen and Carl Friedrich Behrens recorded their observations of how the giant Moai statues were served by a priesthood of very large looking men who had remarkably white skin, long ears and red-hair, while the rest of the population appeared to be of a mixed descent and did not venerate the statues as the priests did. 7 Father Gaspard Zumbohm documented in the mid 1800s that in former times these high priests ate children in the name of their god Make-Make. 8 Excavations on the landward side of the Ahu Nauna site have revealed charred human bones from cannibalistic rituals. 9

According to the oral traditions, none of the principal Polynesian gods were known to the Easter Islanders. Their god “Make-Make,” was a deity unknown in Polynesia. 10 One of the most fascinating sights at the Orongo ceremonial site are the over 480 petroglyphs carved with the “Make-Make” and “Birdman” images that antedate almost everything else on the island. Carved into solid basalt, they have resisted ages of harsh weather. 11 Bird-men – human beings with bird-heads – play a prominent part in the symbolic motifs of god-kings at sea in reed-ships. The bird-men, which were totally unknown to Polynesian religion or art, were just as important in pre-Inca South America as on Easter Island. The god Make-Make is represented in the carvings as a half human-half animal with bowed back and long claw like legs and arms. 12 The oral traditions state that from their god Make-Make descended the line of sacred kings who ruled with unrestricted power. 13

Q If the Easter Islanders all came from Polynesia, why was their god “Make-Make” unknown there?

William J. Thomson arrived aboard the U.S.S. Mohican in 1886 to unveil the mysteries still shrouding Easter Island’s past. He succeeded in obtaining two of the hidden rongo-rongo tablets and purposed to save whatever memory the island elders still had of the tablets and their origins. Due to Thomson’s detailed documentation we are able to gather much of the following information… 14

The oral traditions in regard to the incised tablets assert that the first King, Hotu Matua, possessed the knowledge of this written language. The knowledge of the written characters was confined to the royal family, chiefs and priests. 15 Hota Matua had been a very powerful chief in a land that had been ravaged by great wars. 16 Determined to flee, he embarked with 300 hundred chosen followers in two ships that were 90 feet long and 6 feet deep. After 120 days, they found the island and shortly after Hotu Matua’s queen gave birth to a boy for which they named the island Te-Pito-o-te-Henua “The Navel of the World.” However, Hota Matua was reported to have found a graveyard of tombs near the beach at Akena when he first landed. 17 Hotu Matua’s group had discovered an island that had already been settled… 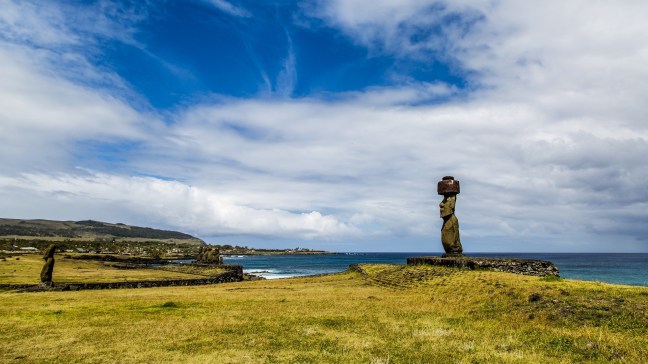 The oral traditions of the islanders state that the island was settled twice, the first time by a race known as the “Long-ears” who came from the east, and the second time by the “Short-ears” from the west. 18 The Long-ears appear to have been a power in the land at an early period in the history of the island. The oral traditions state that the Short-ears were merely laborers, while the Long-ears were the master builders of the larger stone statues which were manufactured in Rano Raraku quarry and found scattered all over the island. The Long-ears are also credited to have engineered the “Ahu” megalithic platforms that were later used as foundations for the Moai as well as inventing the rango-rango incised tablets. Perhaps one of the Long-ears greatest feats of all might have been converting the later arriving Short-ears to their own religion. For two centuries, the Short-ears willingly toiled to erect monuments that represented the long-eared chiefs of the original population. 19 It is interesting to note that the hillsides of Poike are remarkably free from stones compared to the rest of the island’s surface. According to oral tradition, Poike was the last refuge of the Long-ears. After co-extisting for approximately 200 years, a civil war erupted when the Short-ears revolted after they were forced to clear the entire Poike peninsula of stones. Therefore, the Long-ears had dug an extensive trench and laid a pyre in it, then withdrew behind these fortifications to the eastern hillsides of Poike. However they were outwitted by the Short-ears who faked a head-on night attack. When the Long-ears, believing the attack was real, lit their pyre, another unit of Short-ears secretly came in around the trench, fell upon the Long-ears and pushed them into what became their own death trap. 20 Archeological excavations on the island have revealed the remnants of what is believed to be a long underground ancient ditch full of charred wood fragments several feet under the surface of the island.

Q Did King Hotu Matua come from the west and represent the later period Short-eared inhabitants, and did he receive knowledge concerning the rongo-rongo tablets before the Long-ears were destroyed?

Q Were the Long-ears of the “East” associated with the master builders of Peru and Bolivia who engineered similar megalithic marvels?

Q Were the Long-ears, who possessed strange features and ancient technology to build the megalithic earthworks, genetically altered giants of some some kind?

COMING UP NEXT IN PART 2 OF THIS 3 PART SERIES: ANCIENT PAVED ROADS, CONSTRUCTION OF THE COLOSSI & WALKING STATUES.